Wonder Why Katy/Houston has a Huge Homeless/Lost Pet Population? Hmmm..

Wonder Why Katy/Houston has a Huge Homeless/Lost Pet Population? Hmmm..

The entire Houston metropolitan area has a huge problem of a large population of lost or abandoned and/or homeless dogs and cats. Last year I heard two different TV stations state there are over 1 million dogs roaming the streets of metropolitan Houston let alone the number of cats on the streets.

Every day I see several internet posts concerning lost dogs or cats. Sometimes these pets are found and returned to their owners but in my experience this does not happen all that often. This week I encountered an experience which may help to explain a small part of this large problem.

I was driving to our mailbox which located on the first street in our section of Grand Lakes Katy TX. I drive fairly slow on this street as I know there several pets, children and people walking usually in this part of the subdivision. As I got closer to the central mail box section for our street (next street north) and the street I was on, I saw out of the corner of my eye something moving and house door opening. I put on my brakes and lo and behold a small/young puppy ran in front of my car and stopped in his or her tracks. If I drove like most of the drivers in this neighborhood this poor tiny pup would have been hit.

My eyes panned the entire area and two small children ran out of a home along with another small older dog. These two must have opened the door and did not think about the dogs running outside! Chaos ensued as the two kids ran into the street to try to capture their dog and of course the dog ran away very quickly. They certainly did not look to see if any cars were rolling down this street. The older dog decided to join the fun and he or she  started running away down the street and sidewalk. A few seconds later out the front door bounds a teenage girl who was yelling at the kids and dogs. Of course she had her smartphone in her hand and was looking at most of the time. The kids and dogs were no longer in front of or near my car. I went to mailbox to get our mail and I got to view the unfolding melodrama.

There was a flurry of activity. The teenager and one the kids cornered the puppy and put this pup into a car. It appeared the teenager and at least one child got into the car. The older dog was heading east down the sidewalk albeit at a slow pace. After collecting our mail, I drove down the street very slowly and as I went past the older dog who had stopped to catch its breath. I pointed at the older dog as I thought the teenager had gotten all into the car to chase down the other dog and was behind me. No such luck as she was probably too busy texting.

Lucky for all involved another Mom who also lives in this street turned the corner with her dog on a leash. This Mom based on what I could hear and understand knew who this pup belonged to. She immediately took charge as she saw me pointing at the dog and the dog appeared to listen to her. I was ready to park my car and try to capture this loose pet but I figured this pup would just run away from me.

In my mind here was one small classic example of why there are so many lost and or homeless pets in this area. This whole episode could have been a total disaster as one or both children could have been hit by a car along with both pups. Parents please discuss safety with all involved parties and tell children to be aware of pets running out a door! Teenagers who are married to their smartphones are not a good choice for a baby sitter or pet sitter.. I know DUH!! 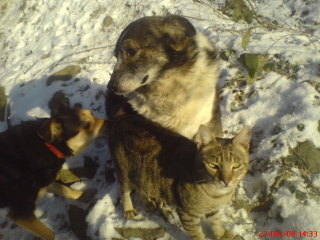 Note: Katy TX is about 25 -30 miles due West of downtown Houston TX.

If you have any questions about Katy Homes for Sale or Katy Homes for Rent in the Katy Texas and/or Sugar Land TX, and/or Cypress TX and/or other surrounding areas, contact me via my cell: 281-904-6772 or via Email:

or visit me on my web site at

or visit me on Google plus

Scan me with your smartphone to bookmark
our mobile website at http://katytx.realbird.com

Read my blog at http://bobgilbertblog.com

Search Homes in Katy or anywhere in the Houston area.